You are here: Home1 / Uncategorized

A herd of sheep in China’s Inner Mongolia have gained worldwide attention for continuously turning in circles for almost two weeks.

The flock, which is shown in pen number 13, has been moving in a clockwise direction for about two weeks, according to surveillance footage.

Video of the sheep circle has gone viral, with the creepy footage being seen by some as the “sign of the apocalypse”.

The owner claims the odd behaviour began with a few of the farm animals before the entire flock joined in. 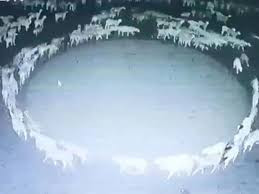 There are 34 sheep pens at Ms. Miao’s farm, but only the sheep in pen number 13 have been acting strangely.

Some believe this is normal sheep behaviour, but others think something more sinister is behind the odd movements.

The disease listeriosis, which may affect both humans and animals, has been mentioned by several Twitter users as the possible cause of the sheep’s condition.

The illness manifests as lack of coordination, salivation, circling, and other symptoms.

The sheep, according to the government-run Chinese

A snapshot of a flock of sheep standing in a circle in a field was taken in East Sussex last year, and similar reports of sheep acting strangely and forming circles have been made in the past.

Cycling through the East Sussex town of Rottingdean, Christopher Hogg noticed the animals acting like they were “in the X-files.”