The centenarian, identified only as Josef S, who refused to make a statement, also hid his face from cameras as he appeared in court in Germany charged with complicity in 3,518 murders at the Sachsenhausen death camp between 1942 and 1954.

Charges against him include aiding and abetting the ‘execution by firing squad of Soviet prisoners of war in 1942’ and the murder of prisoners ‘using the poisonous gas Zyklon B’. 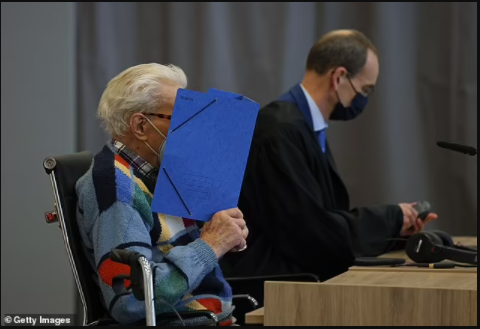 Josef’s refusal to speak is significant because trials of former guards provide a chance to amass new evidence about what happened at Nazi death camps and enter in into historical record.

Other guards,  including ‘Bookkeeper of Auschwitz’ Oskar Groening – have spoken about their activities at the camps during their trials.

Josef’s trial is taking place at a court in the town of Neuruppin and close to where the camp was located, with hearings due to last just a few hours each day due to Josef’s advanced age.

He is just the latest elderly member of the Nazi genocide machine to be put on trial for crimes committed during the Second World War.

The case comes a week after a 96-year-old German woman, who was a secretary in a Nazi death camp, dramatically fled before the start of her trial but was caught several hours later.

She too has been charged with complicity in murder. Her trial resumes October 19.

Prosecutors have been going after camp administrative staff in recent years after a 2011 ruling gave the green light that former Nazis can be held responsible for deaths in camps where they worked even if it cannot be proved they personally killed anyone.

Despite his advanced age, a medical assessment in August found that Josef S. was fit to stand trial. The proceedings are expected to last until early January.

‘He is not accused of having shot anyone in particular but of having contributed to these acts through his work as a guard and of having been aware such killings were happening at the camp,’ a court spokeswoman said.

Thomas Walther, a lawyer representing several camp survivors and victims’ relatives in the case, said that even 76 years after the end of World War II, trials like these were necessary to hold perpetrators to account.

‘There’s no expiry date on justice,’ he told AFP.

One of his clients is Antoine Grumbach, 79, whose father Jean was in the French resistance and was killed in Sachsenhausen in 1944.

He hopes Josef S. will shed light on the methods used to kill people in the camp, but also that the accused ‘will say ‘I was wrong, I am ashamed”, Grumbach told AFP.

The Nazi SS guard detained more than 200,000 people at the Sachsenhausen camp between 1936 and 1945, including Jews, Roma, regime opponents and gay people.

Tens of thousands of inmates died from forced labour, murder, medical experiments, hunger or disease before the camp was liberated by Soviet troops, according to the Sachsenhausen Memorial and Museum.

Follow Me!
”Heaven Has Gained A Great Angel” – Tributes Pour In From...