The young lecturer was said to be travelling to Ikere-Ekiti in Ekiti State to see his family when he was kidnapped along the Akure-Ikere Ekiti road on Friday, October 1.

It was gathered that the victim’s vehicle which was spotted on the road unlocked attracted some residents of the community who raised the alarm over the development.

The elder brother of the victim, Toyin Adinlewa, who confirmed the abduction disclosed that his abductors have contacted the family, demanding N10m as ransom to secure the freedom of the lecturer.

It was further gathered that the kidnappers also contacted the wife of the victim warning her not involved security personnel in the release of her husband.

A source close to the wife explained that Adinlewa was heard telling his wife that they have been trekking for hours in the bush with nothing to eat or drink.

He said the lecturer disclosed that his leg is aching from the long walk and that his phone would soon be taken away from him by his abductors.

The source said the call was interrupted by one of the suspected abductors before the conversation came to an end.

Confirming the abduction, spokesperson of the State Police Command, Funmilayo Odunlami, said the incident happened at the boundary of Ondo and Ekiti states.

She said some people who noticed the vehicles parked on the road informed the police who raced to the place and later discovered that the owner of the vehicle had been kidnapped.

Odunlami said the family of the victims also reported the incident to the police, saying detectives from the command had swung into action after visiting the scene of the incident.

“Initially, we thought it was a case of an abandoned vehicle. It was later that the family contacted the police that their son had been kidnapped. The incident happened between the boundary of Ondo and Ekiti States,” she stated.

“Our anti-kidnapping unit has swung into action towards rescuing the victim. They are already combing the bush and the axis where it happened. We all are on the trail of the kidnappers and arrest would be made as soon as possible. We have told our men to be on the alert, especially those coming to the forest across the state” she added. 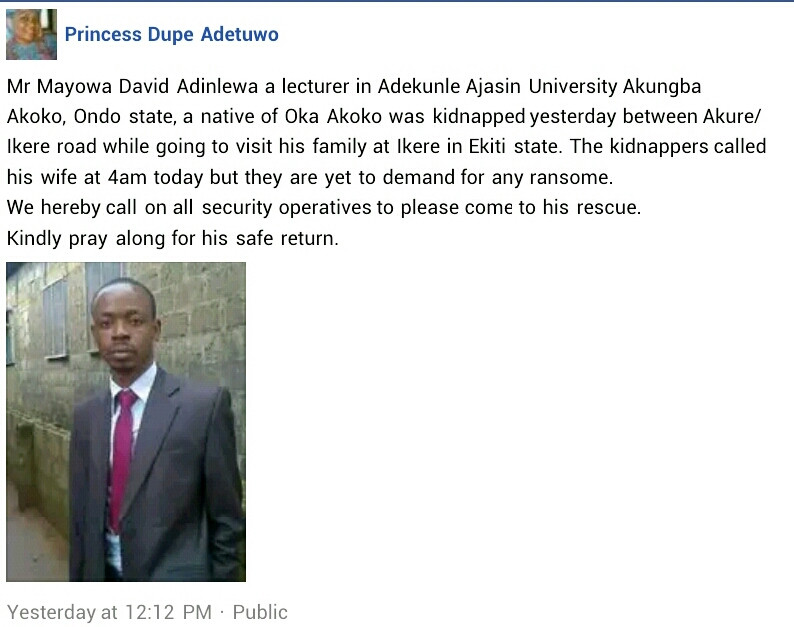 Couple found dead in their Osun apartment
Scroll to top