Wilder, an Alabama native, will attempt to avenge his stoppage loss to Fury when the heavyweight rivals share the ring and Wilder has threatened Fury.

Tyson Fury said the third fight against Deontay Wilder will finish even quicker than his emphatic win last time around. 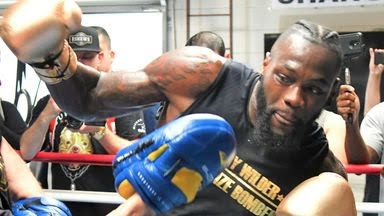 At this month’s pre-match press conference, Fury had told Wilder that he would build his weight up to 300lbs to ‘run him over like I’m an 18-wheeler.’

But Wilder has posted his response on social media after appearing to lift a 310lb weight that would be bigger than Fury’s envisioned weight.

“I’m going be a train,” said Wilder. “You say a semi-truck, I’m going to run you over with a train, baby.

Fury was ordered to face Wilder by an arbitration judge.

The judgement derailed plans for an undisputed world title fight against Anthony Joshua in Saudi Arabia this summer.

It’s shocking to hear about insinuations of snatching Dino Melaye from...
Scroll to top