Guardiola became the first manager to win the League Cup in four consecutive seasons on Sunday April 25, while no manager has lifted the trophy more times than the Spaniard (four – level with Brian Clough, Sir Alex Ferguson and Jose Mourinho).

Defender, Aymeric Laporte’s late winner clinched a 1-0 win for City over Tottenham at Wembley, and despite experiencing success from his days at Barcelona to Bayern Munich and Man City.

Guardiola however says his success is due to the fact he has coached big clubs. 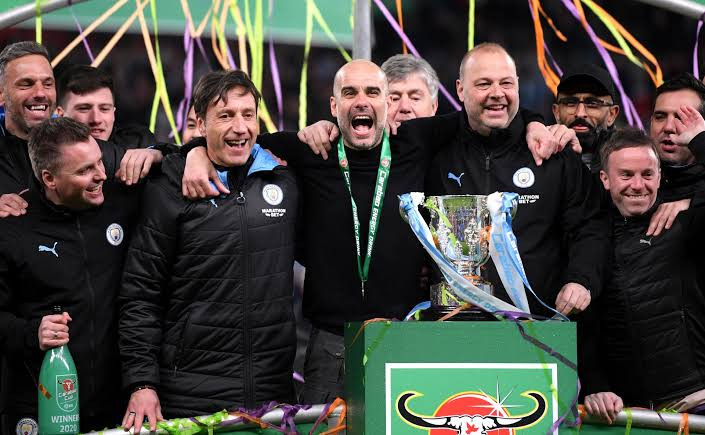 “It’s good. I was in big clubs: Barcelona, Bayern Munich, here. That’s why it’s easier to do,” Guardiola told Sky Sports after being asked about his managerial accomplishments.

Guardiola also spoke about supporters being allowed at Wembley- the first time his club have played in front of fans for months since the pandemic started.

“It’s not full [in the stadium] but it was a great noise [from the supporters],” he added.

“Today we are incredibly happy that we have four in a row in this competition. We tried to win the game, created a lot of chances.

“They had some chances on the counter but in general we had a good game.”

City are also close to winning the Premier League title as they have a 10-point lead over second-place Manchester United.

City will also face PSG in their semi-final first leg on Wednesday.

Follow Me!
“Nigerians are the death of Nigeria” Businesswoman narrates encounter...