Rapper Cardi B, has blasted a US lawmaker after he took to the congress floor to criticize her over one month performance at the Grammies.

Cardi B and Megan Thee Stallion performed their hit ‘WAP,’ an acronym for ‘wet a** p****,’ at the March Grammy awards ceremony 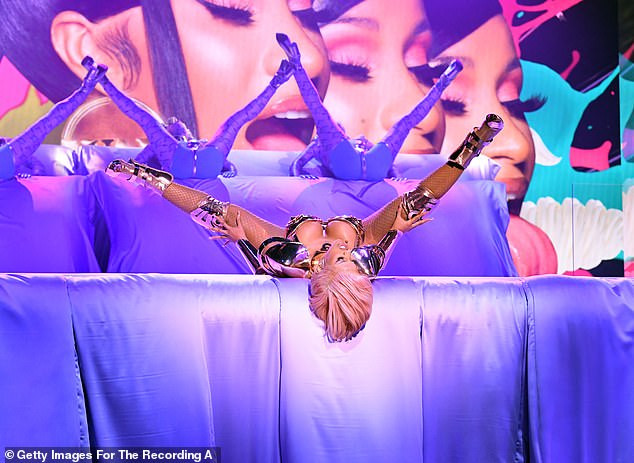 The highly talked about performance featured her pole-dancing on the heel of a gigantic stiletto and gyrating on an oversized bed.

The FCC amassed 1,316 individual complaints so far about the 2021 Grammys, according to public posting’s on the agency’s website – many of which reference the ‘WAP’ performance. 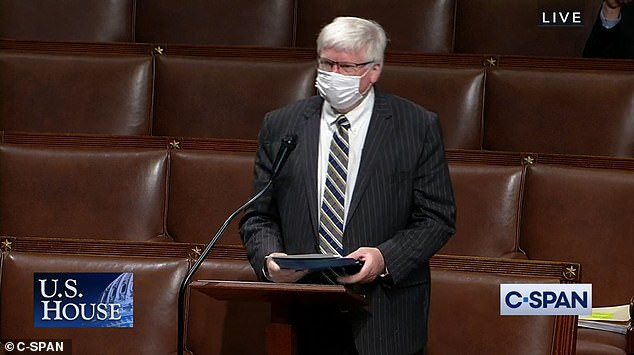 On Thursday April 22, Grothman went after the rapper on the House floor saying that he’s been receiving complaints to his office about the rapper’s performance at the Grammys and said that the Federal Communications Commission (FCC) should do their job by stopping performances like that from being played in living rooms of Americans.

‘They wonder why we are paying the FCC if they feel that this should be playing in living rooms across the nation,’ the Wisconsin Republican said.

‘I realize that Kamala Harris has used her fame to promote this performer, but I assure the FCC that millions of Americans would view her performance as inconsistent with basic decency.’

‘Wake up, FCC, and begin to do your job,’ he said. ‘The moral decline of America is partly due to your utter complacency.’

Cardi B immediately hit back, writing on Twitter: ‘This gets me so mad ya don’t even know! I think we all been on the edge this week since we seen police brutality back to back including watching one of the biggest case in history go down DUE to police brutality but wait!’ she said in reference to the Derek Chauvin guilty verdict in the killing of Minneapolis black man George Floyd.

‘This is wat state representative decide to talk about,’ she said of Grothman’s floor speech.

In another tweet, Cardi B wrote: ‘Mind you Nikkas can’t give a word about Jacob Blake or give him proper Justice but this part of the reason why !!!!!’ she said referencing the 29-year-old black man who was shot seven times in the back last year by police in Kenosha, Wisconsin, leaving him paralyzed.

‘They giving seats to F**KIN IDIOTS!!’ she said.  ‘This is why people gotta vote, elect better people cause you got these dum a**es representing states.’

Cardi B also featured a tweet from a Roll Call reporter asking people if they’ve called their member of Congress to complain about the ‘WAP’ performance – an effort to back up Grothman’s claims. 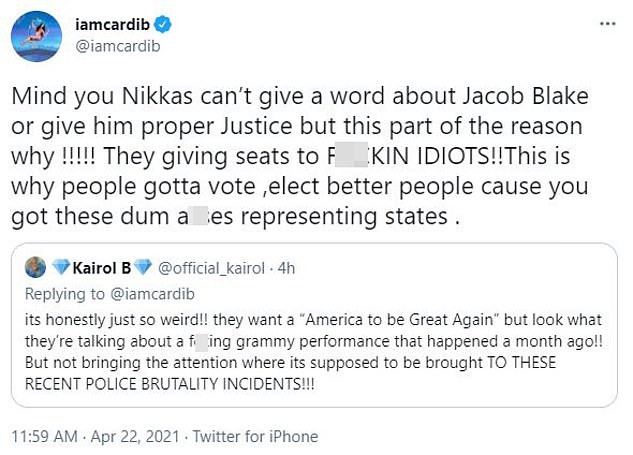 Follow Me!
Amputee hawker who went viral for selling water despite disability transforms...