The Kano State Police Command has arrested three suspects who stabbed one Mohammed Sulaiman to death and made away with his mobile phone.

The suspects also confessed to have attacked one Kingsley Sunday and took away his mobile phone.

Spokesperson of the command, DSP DSP Abdullahi Haruna Kiyawa, in a statement on Monday, September 20, said the suspected phone snatchers were arrested for “armed robbery and culpable homicide” 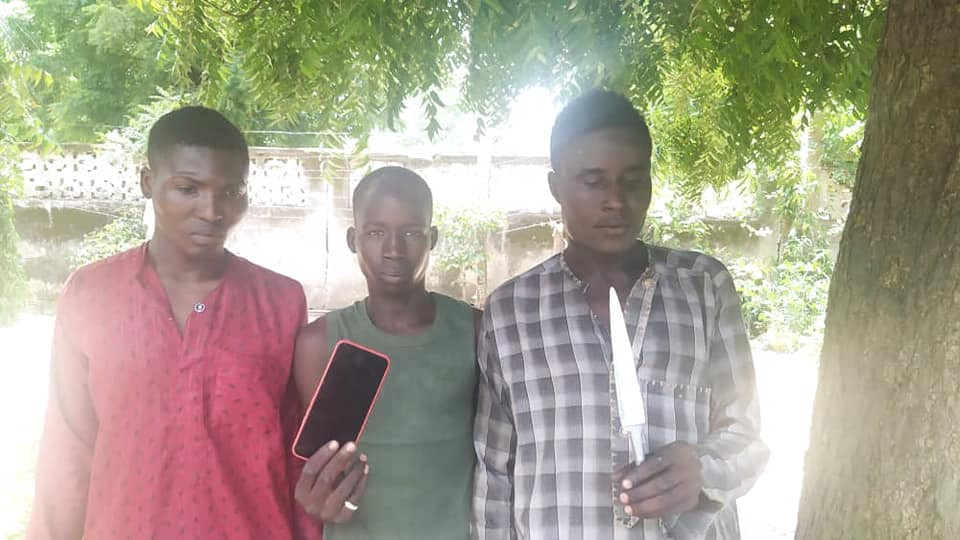 “On the 19/09/2021 at about 2300 hours, a report was received that some hoodlums attacked one Mohammed Sulaiman, ‘m’, of Sharada Quarters Kano at Yahaya Gusau Street Sharada, stabbed him with a knife and robbed him of his Mobile Phone,” Kiyawa stated.

“Upon receipt of the reports, the Commissioner of Police, Kano State Command, CP Sama’ila Shu’aibu Dikko, raised and instructed teams of detectives led by SP Suleiman Ibrahim to arrest the culprits

“The Team swiftly swung into action, and following credible intelligence, arrested, (i) Hussaini Malami, ‘m’, 17 years old, (ii) Harisu Manniru, ‘m’, 20 years old, and (iii) Hussaini Abubakar, ‘m’, 19 years old, all of Zawaciki Quarters, Kumbotso LGA, Kano State. A knife with blood stain and the handset of one of the victims were recovered from them

“On preliminary investigation, the suspects confessed to have conspired and attacked Kingsley Sunday, stabbed him on his shoulder and forehead, and made away with his mobile phone. The suspects are giving useful information.”

The State Commissioner of Police, CP Sama’ila Shu’aibu Dikko, ordered that the case be transferred to the Criminal Investigation Department of the Command for discreet investigation after which the suspects will be charged to court for prosecution.