UFC superstar, Conor McGregor has made a cheeky offer to buy Manchester United after angry fans urged the Glazer family to sell the club following their controversial bid to form a breakaway league.

The Red Devils were one of 13 clubs to pledge their support for the £4.6bn scheme to form a controversial breakaway competition, which they referred to in the announcement as the Super League.

Following furious outrage from fans and footballers over the proposed move, all the 6 English clubs pulled out of the European Super League on Tuesday night.

That news was followed by the announcement that United’s executive vice-chairman Ed Woodward would be standing down from his position at the end of the year.

McGregor, who is the biggest earner in UFC, and the 16th highest-paid athlete in the world in 2020, according to Forbes, took to Twitter to tweet about buying Manchester United club from the Glazer’s family.

He tweeted to his 8.6 million followers, “Hey guys, I’m thinking about buying Manchester United! What do you think?” 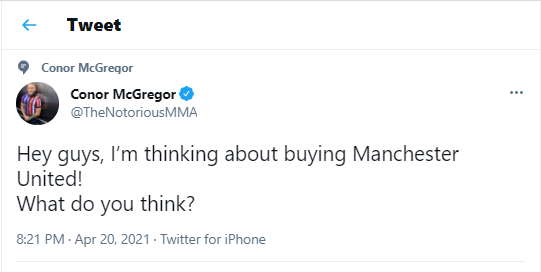