You are here: Home1 / Entertainment

According to President Buhari, keeping every election campaign promise he made in 2015 and 2019 has not let Nigerians down.

According to a statement made by Femi Adesina, a presidential advisor, the President made this declaration on January 23 during a meeting with Dr. Rilwanu Adamu, the Emir of Bauchi.

“Whenever I travel for business or pleasure to a state, I usually pay a visit to the Emir and the Chief to express my gratitude.

I want to point out that from 2003 to 2011, I visited every local government, and in 2019, when I was running for re-election for a second term, I visited every state in the Federation. The number of people who came out to see me was greater than anything anyone could pay for or expect. I promised and vowed that I would do everything in my power to serve Nigeria and Nigerians, and so far, I have not let anyone down.

Award-winning Nollywood actor Ini Edo has added another success to her résumé by making her international film debut in the Netflix production of Shanty Town.

Ini, whose acting career spans over two decades, is making significant progress in global production as a co-producer of the dramatic crime thriller.

Shanty Town is a story that surrounds three unusual prostitutes who unite to take down one of the biggest criminal rings in Lagos state.

In the project, Ini Edo also doubles as a lead character, where she plays the role of Ese equally referred to as ‘The Fire Brand’.

The story isn’t just about a collaboration to fight crime, but it’s that of freedom for all women to become all they want to be and live their positive dreams. This is a great advocacy for women and young girls who have gone through a lot.

It can be recalled that Ini Edo has been an ardent campaigner for women’s inclusion in politics, tech and every worthwhile aspect of human development, as this goes to prove that women are a force to reckon with.

With Shanty Town, she joins the league of top influential Nigerian and African women in the film production circle which include Mo Abudu, Funke Akindele, Bolanle Austin-Peters amongst others.

Eddie Nketiah, an Arsenal striker, scored a thrilling late winner against Manchester United on January 22 to secure Arsenal’s victory and all three points.

In the historic Emirates match, Nketiah scored from close range to secure a spectacular victory and restore the Gunners’ five-point lead atop the standings.

Marcus Rashford, in the first half scored a long-range strike but it didn’t take long before Nketiah leveled for the hosts through a towering header from Granit Xhaka’s cross. 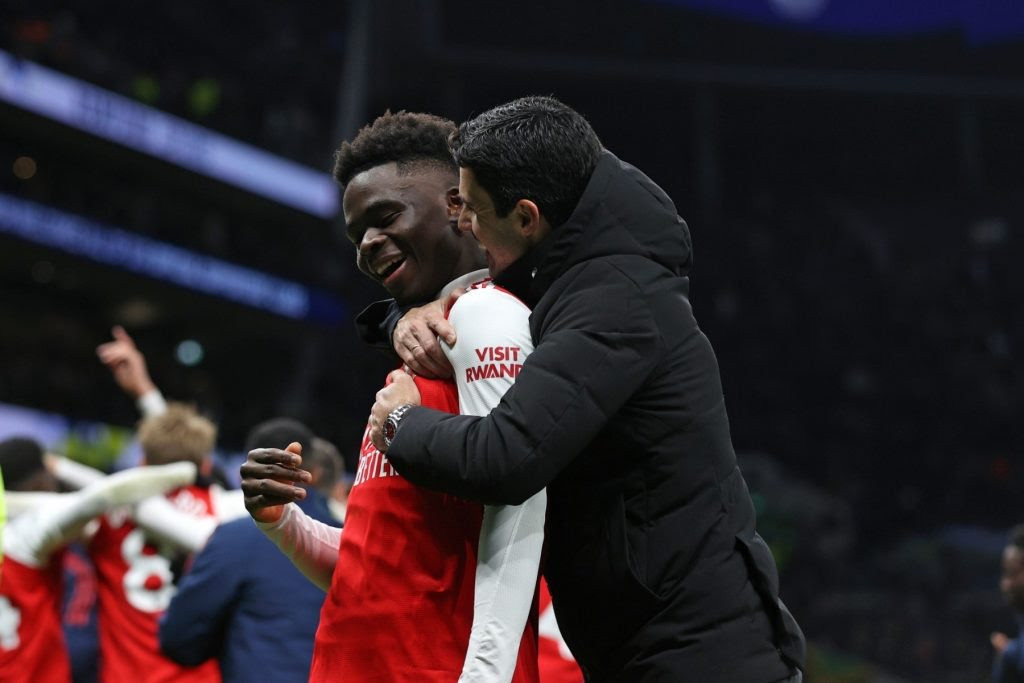 Arsenal, brimming with attacking intent throughout the game then took the lead when Bukayo Saka fired into the corner from 20 yards.

As the game entered the final ten minutes, Arsenal kept putting the United rearguard under pressure. 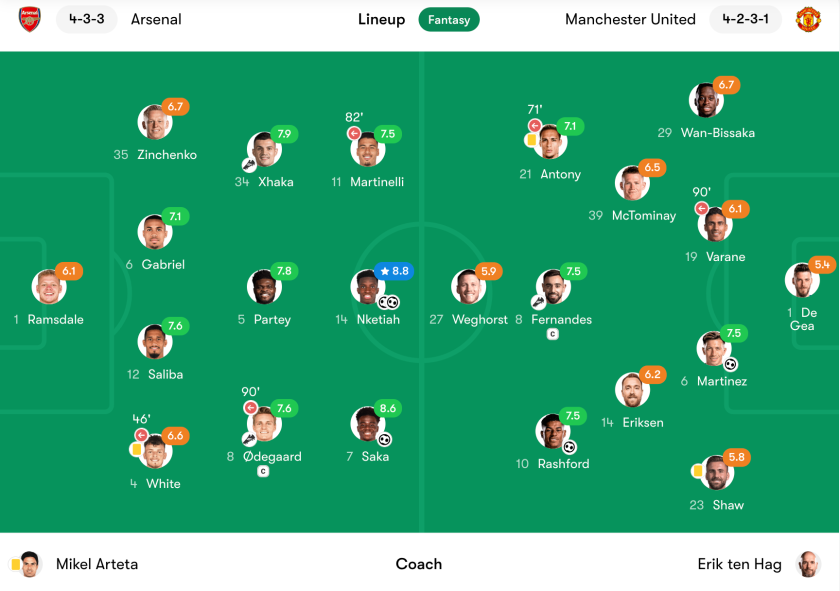 Leandro Trossard came on for his debut in the later stages to bolster the attack.

And the Belgian was involved in the late, late winner. After the ball bounced around in the area, it fell to Nketiah who prodded past for the winner.

The Emirates stadium was quiet as they waited to find out if VAR would rule the goal as offside. But then, the stadium erupted as the goal was given. 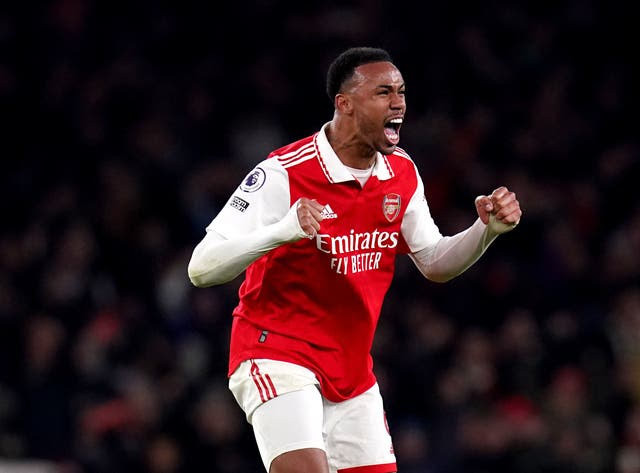 It was Nketiah’s 13th goal in his last 13 starts at the Emirates – he’s now the leading scorer, for the league leaders.

Revenge is a dish best served by Nketiah!!!!

No Arsenal fan will scroll pass this without smashing the like button with a smile pic.twitter.com/dwR27Yq7ee

Uzoamaka Ohiri, ex-wife of comedian and talk show host, Chinedu Ani, a.k.a Nedu, has taken to Instagram to shade him.

She shared new photos of herself and wrote in the caption: “I made sure the door was locked… trust me!” 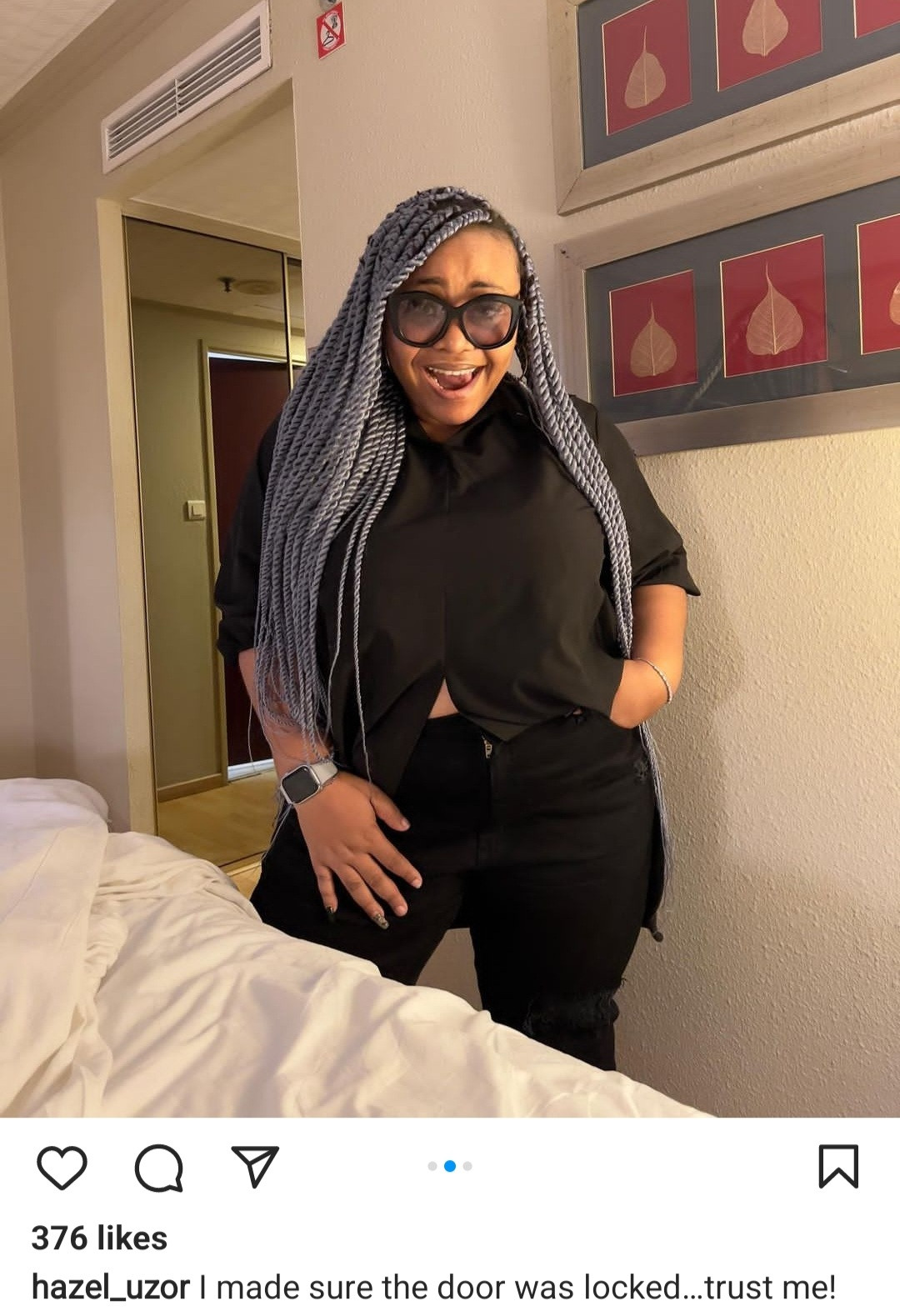 Nedu also alleged in the same interview that he knows two popular men who are paid N8 million and N15 million to have gay sex with rich men.

Eriata Ese, a reality TV star, used social media to confront an unnamed admirer who had asked her out in a manner she didn’t appreciate.

She received a Snapchat Direct Message from the admirer asking if he could take her on a date with private time. Ese tweeted a screenshot of the communication and bemoaned the way in which the admirer had approached her. 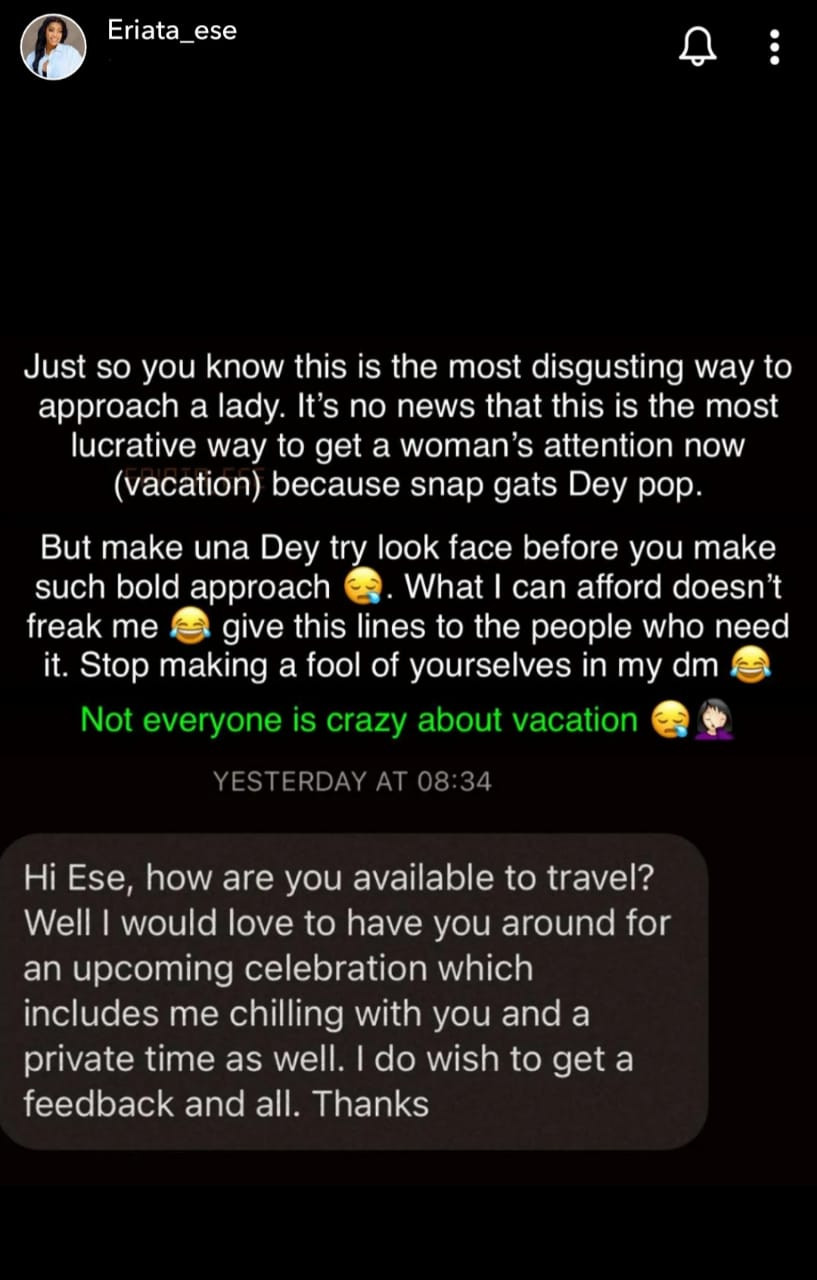 Anita Joseph has responded in response to criticism she received for meeting Labour Party presidential candidate Peter Obi while donning a miniskirt.

After meeting Peter Obi, the actress posted a video of herself attempting to hug him, but viewers criticized her for wearing “inappropriately”.

Many people pointed out that she is married, while others referred to her as “classless.”

Anita took her time to respond to the critics and told them that next time, she will wear “pant” since they are complaining about her short skirt. 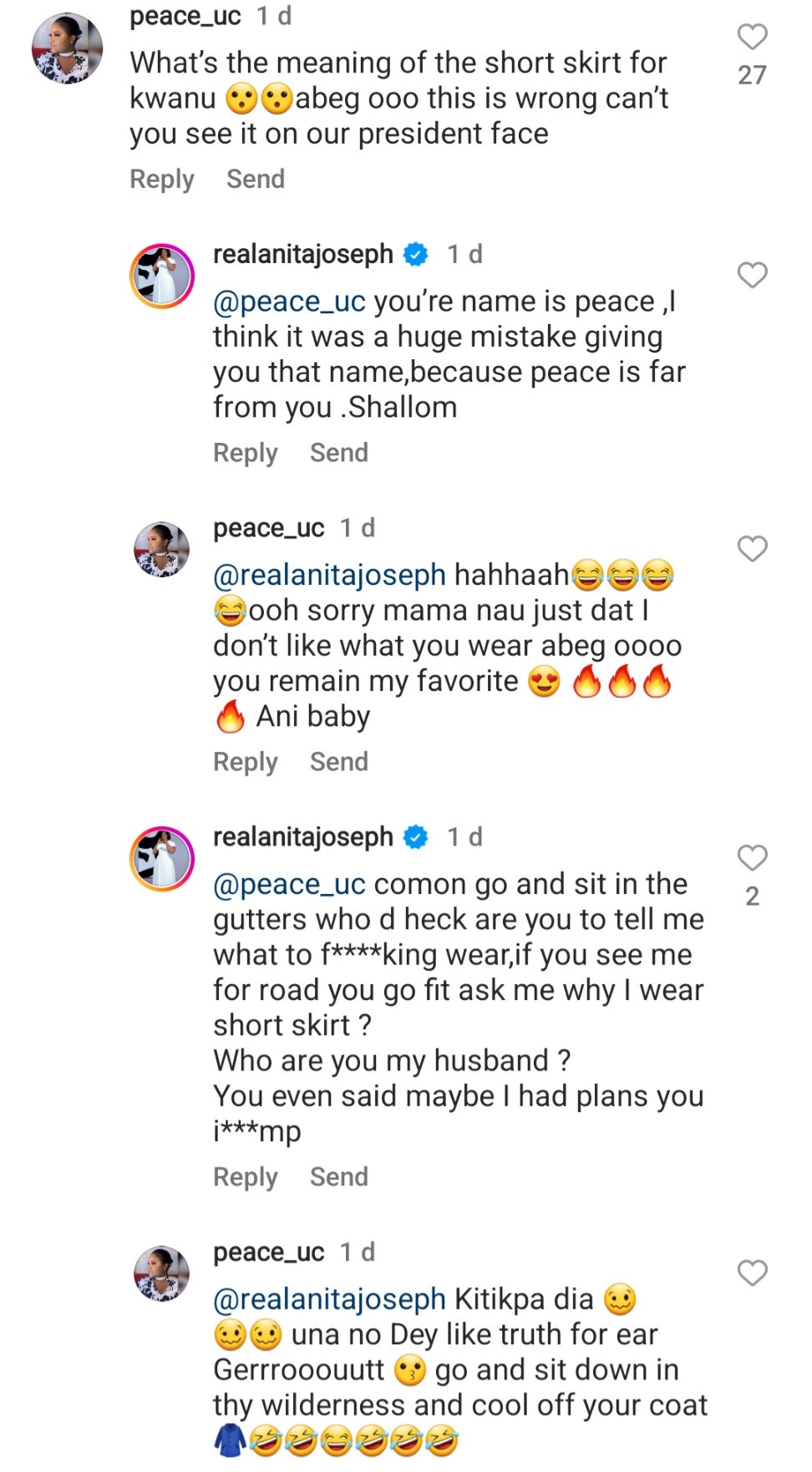 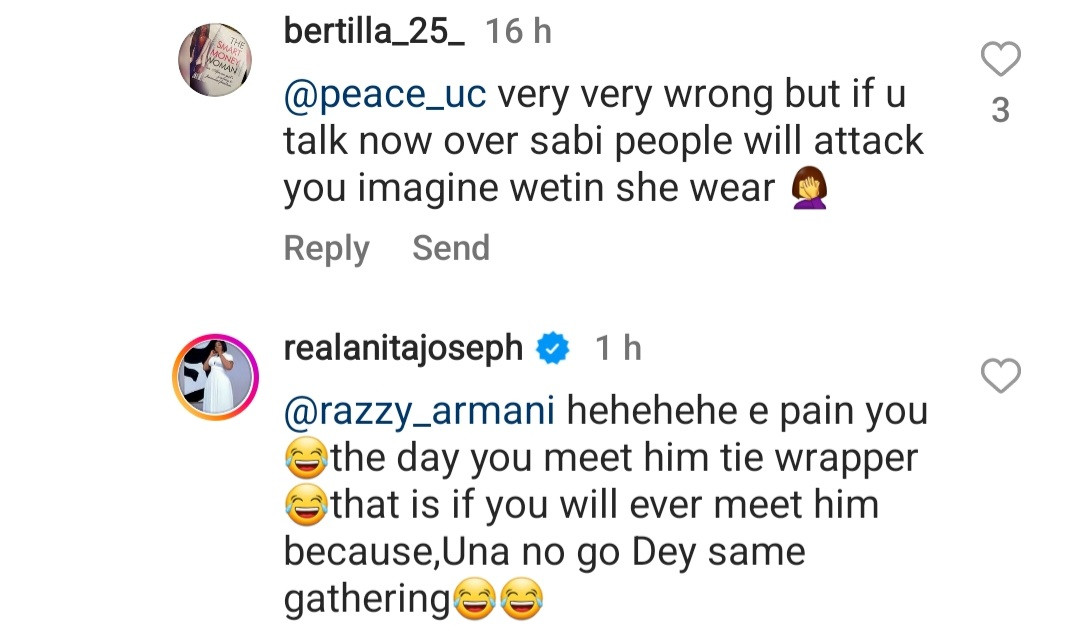 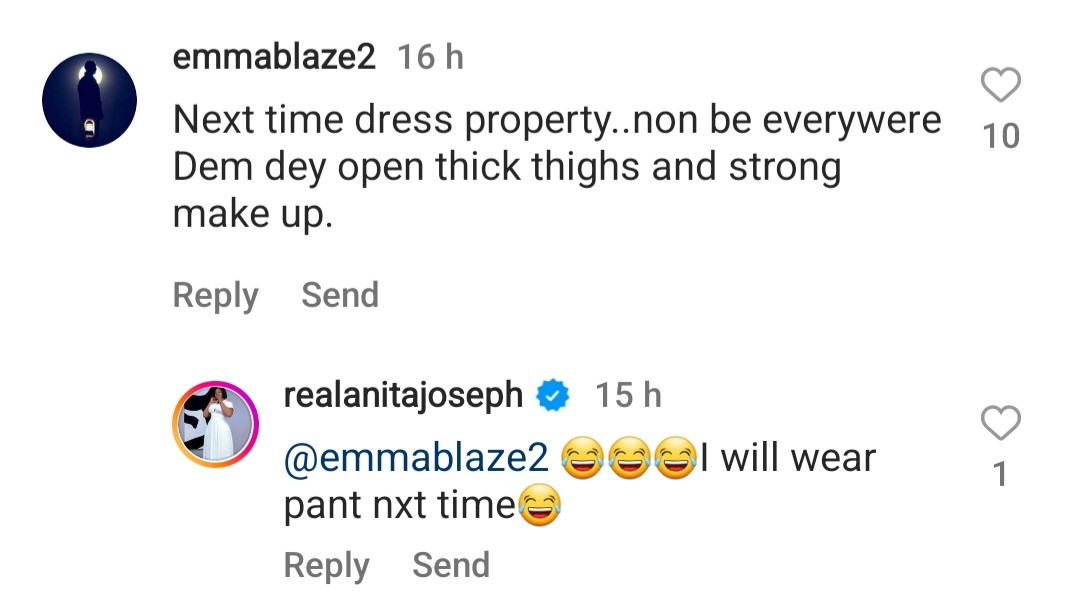 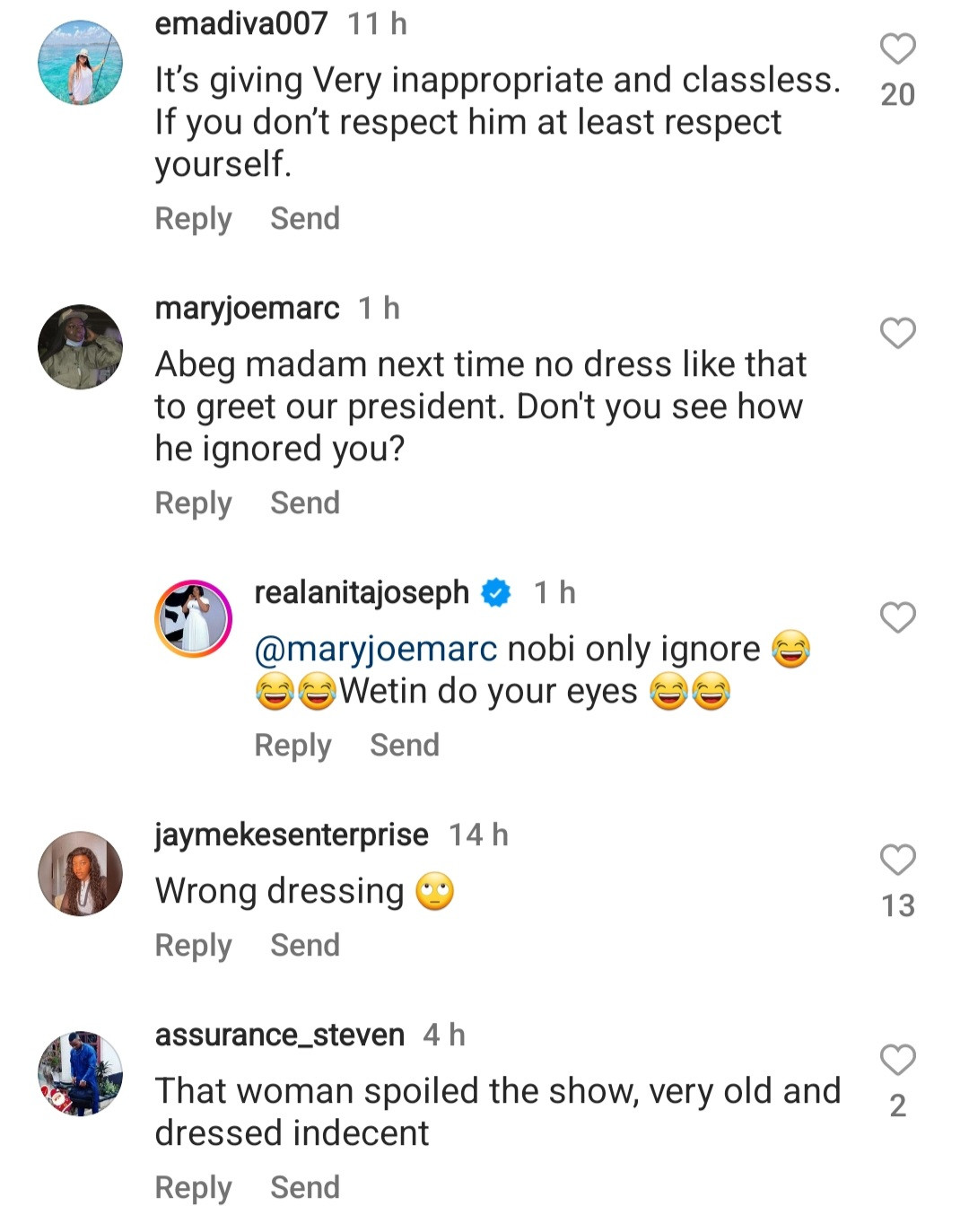 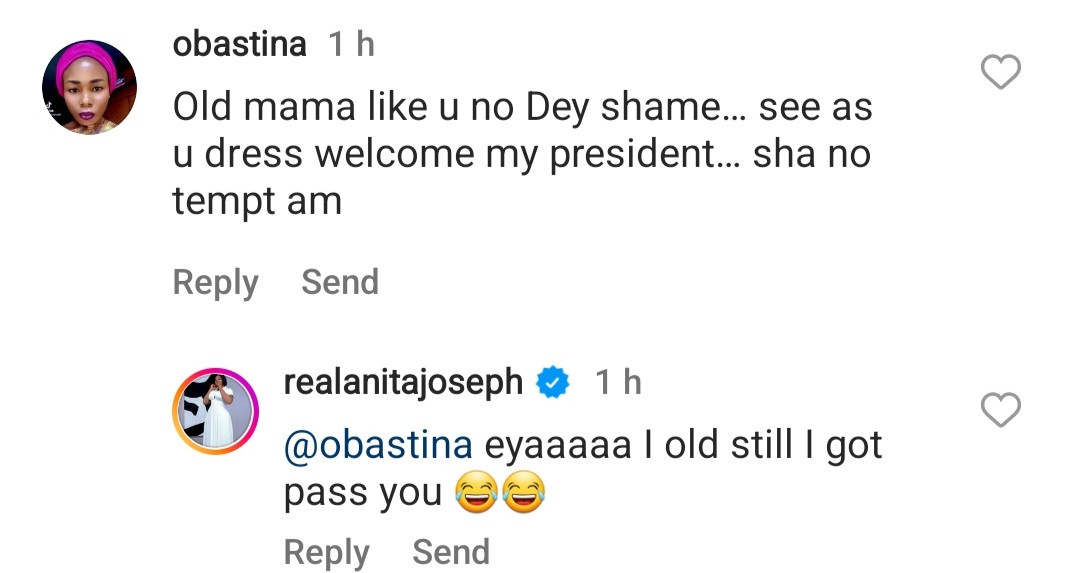 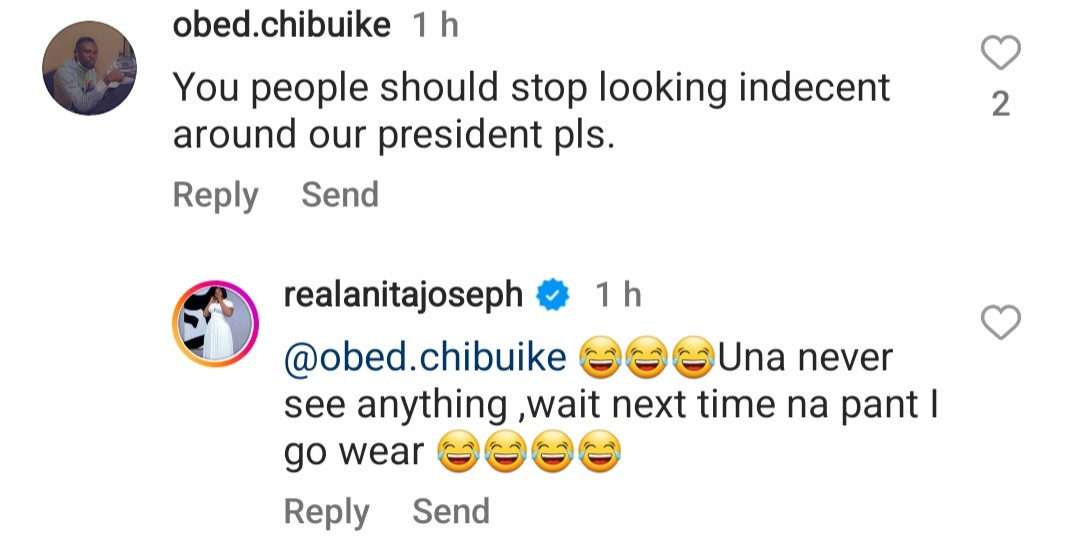 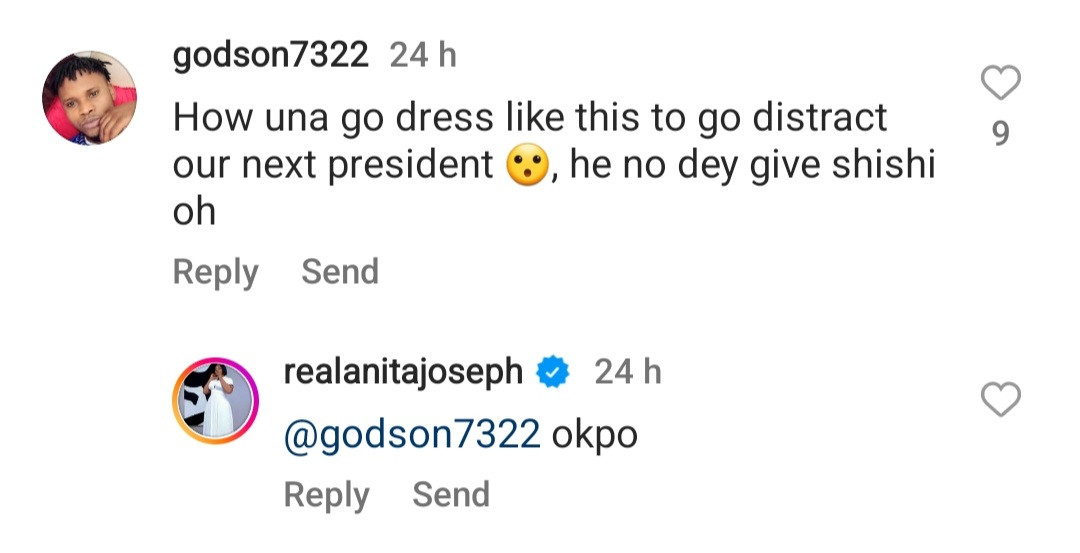 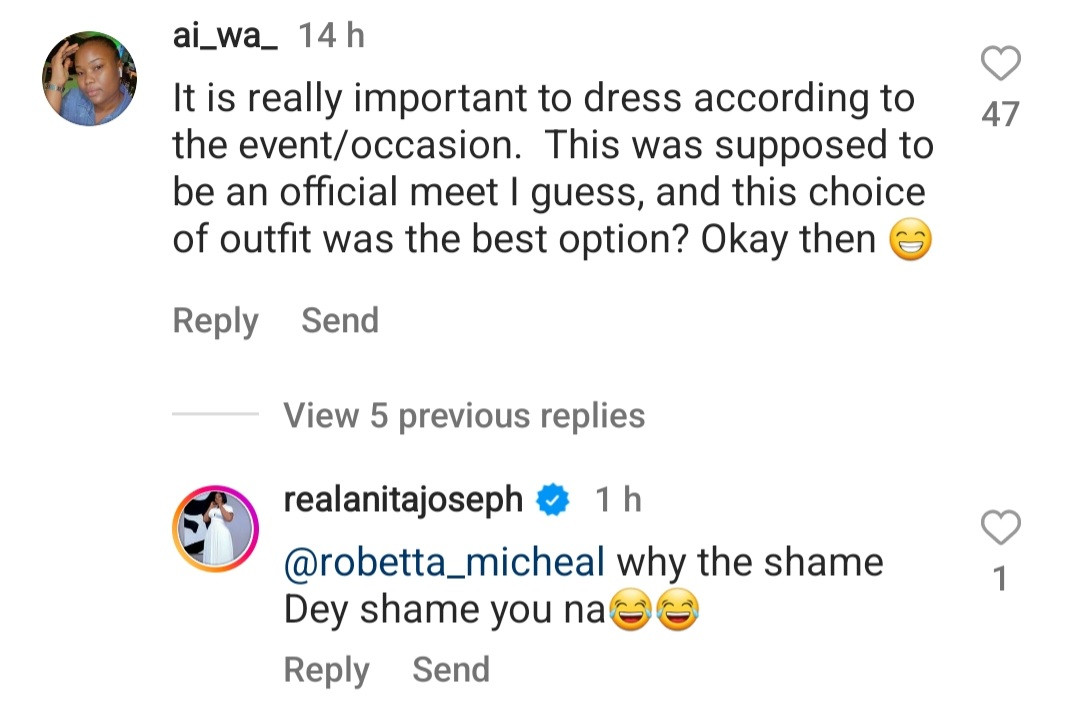 According to rumors, Cristiano Ronaldo is having trouble finding a £4,500 per month chef to prepare meals for him and his family at their “forever house” in Portugal.

The five-time Ballon d’Or winner is reportedly having trouble finding a cook for him and his loved ones at the £17 million villa he is constructing on the Portuguese Riviera, according to Mail Online.

Cristiano is expected to make the mansion his primary family dwelling once he hangs up his boots, hence it has been called his retirement home and is scheduled to be completed in June.

The chef position is still open, but several of the staff positions related to the new-build palace, including a £4,800 per month butler, are claimed to have already been filled.

The Portuguese international is believed to have specifically designed an area in his new Portuguese Riviera mansion for the preparation of the Japanese delicacy. And the question of who is going to prepare sushi and other meals for him, Rodriguez, and their five children is said to be causing him real headaches.

Ronaldo, who was this month officially unveiled as Saudi side Al-Nassr’s star signing on a £173m-a-year contract, can’t find the right person despite offering a salary said to be around £4,500-a-month for someone to whip up his favourite dishes.

In an interview, Jennifer Lopez talked about the “emotional shift” of combining her and her husband Ben Affleck’s families.

The 53-year-old actress discussed uniting her 14-year-old twins Emme and Max with Affleck’s three children, Violet, 17, Seraphina, 14, and Samuel, 10, during an appearance on TODAY to promote her new movie Shotgun Wedding. In addition to describing her 50-year-old Oscar winner as “dreamy” and “a darling,” Lopez predicted that 2022 will be “a wonderful year” for their A-list offspring.

The Jenny from the Block singer discussed integrating five children under one roof while seated next to her Shotgun Wedding co-star Josh Duhamel, 50.

Lopez shares her twins with her ex-husband, Marc Anthony, 54, while Affleck shares his three children with his ex-wife Jennifer Garner, 50.

In an interview with Vogue in December, Jennifer praised Ben’s ex-wife Jennifer Garner as ‘an amazing co-parent,’ sharing that Garner and Affleck ‘work really well together.’

Naomi Osaka has made it known that she is expecting. 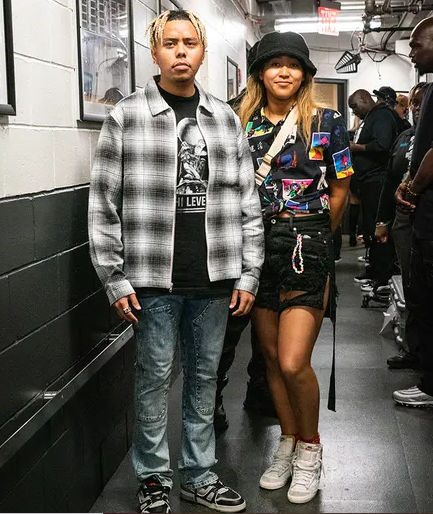 She shared a photo of her sonogram and wrote: “The past few years have been interesting to say the least, but I find that its the most challenging times in life that may be the most fun. These few months away from the sport has really given me a new love and appreciation for the game I’ve dedicated my life to.” 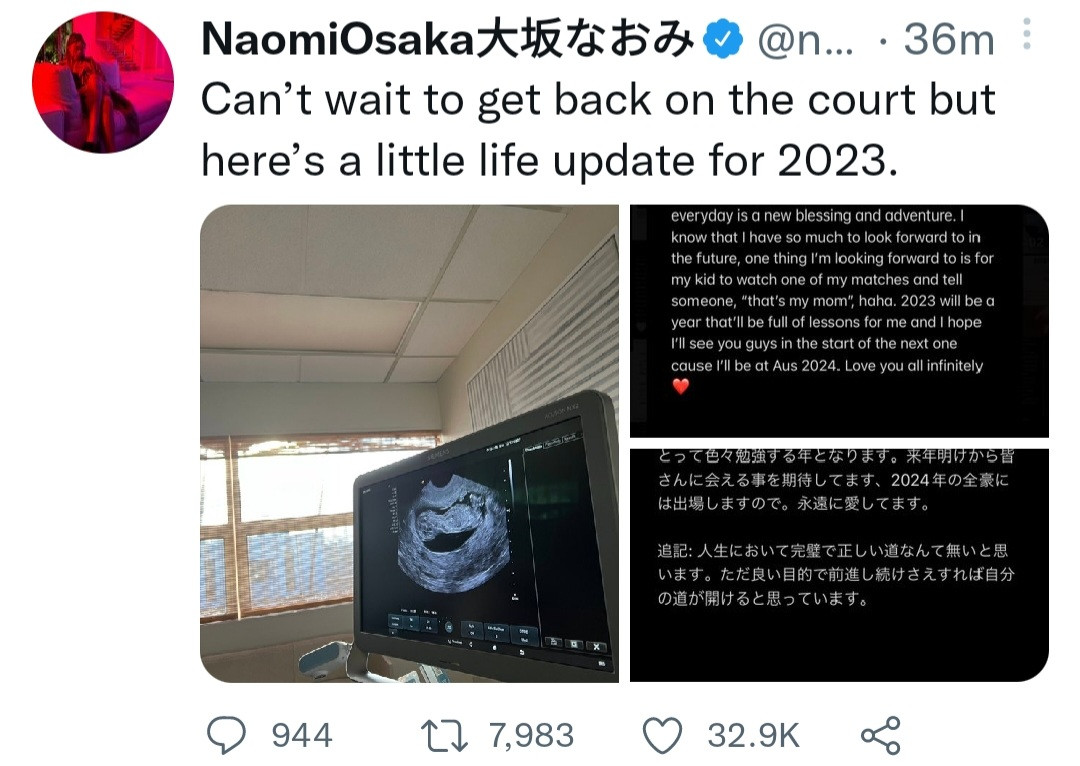 She added: “I realize that life is so short and I don’t take any moments for granted, everyday is a new blessing and adventure. I know that I have so much to look forward to in the future, one thing I’m looking forward to is for my kid to watch one of my matches and tell someone, ‘that’s my mom,’ haha.” 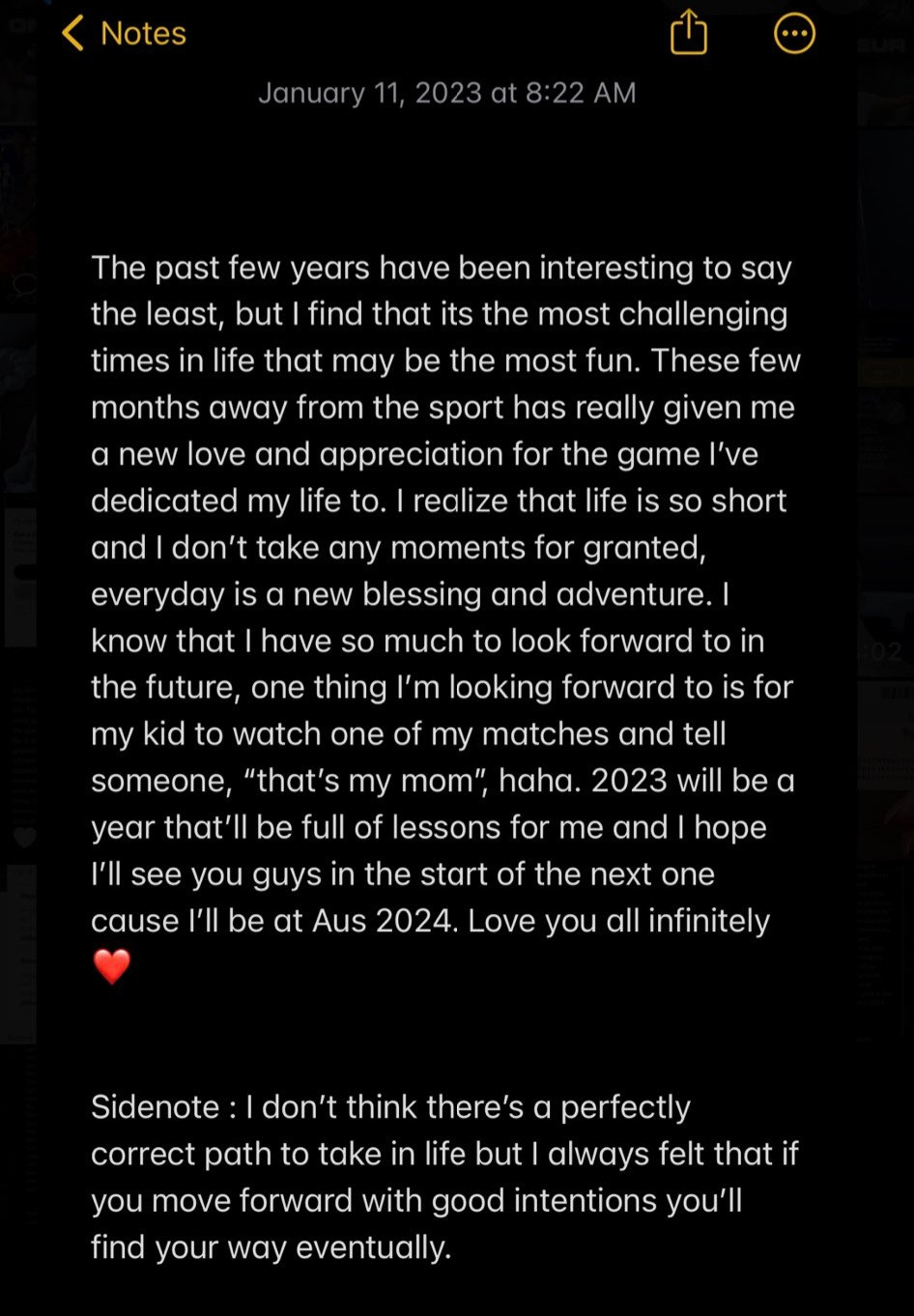 Osaka — who went public with Cordae in 2019 — says she will not be competing in the meantime. However, she plans to return for the Australian Open in 2024.

Diminutive Ghanaian actor Yaw Dabo has lashed out at those who mock him over his height.

Addressing trolls, Dabo stated that his stature has propelled his success. He also said that everyone should remember that God made him special in his unique manner.

“For those who insult me, maybe I am better than you. If I were in your family and I called you to do something for me, you probably would run to get it done. I would probably send you to get chairs if a funeral came home.

“To the person insulting me, should there be a funeral in your house, the wealthiest person will make you carry the coffin. Look, I always say, before you insult someone, you need to look at yourself before rubbishing them.

“Not everything you see with your eyes; you can talk about. This is advice to netizens who sit behind their phones and laptops to talk trash about other people.

“Not everything you see is as it seems. God had a reason for creating me this way, maybe if I were like you, I wouldn’t have gotten to where I am now, but then, since God created me this way, I am better than you.”

Dabo also said his life experience of being the target of numerous negative comments taught him to be careful with his own critiques of others.

“I watch my mouth when saying things about other people. The Bible advises that men lock their mouths with padlocks because it could get them in trouble. The mouth can put you in trouble and this may lead you to say something ill about someone and later look for them to apologise but won’t find them.”